How To Avoid The "Instawall!" 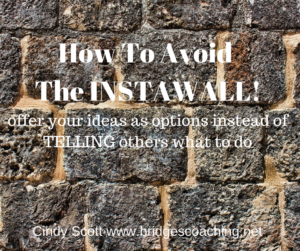 You already know what the Instawall is! You’ve likely been on one side or the other multiple times, but now you have a word for it.

It happens when someone says something that builds an instant wall between two people where no matter what was said it cannot be considered a valid choice. A line of respect has been breached and the listener feels small, invalidated or infantized.

Most often the Instawall happens after openers like these:

“Did you want to (insert what the speakers want them to do) ….?” (this is the soft sell version)

Each of these lines assumes the speaker knows best what should happen next for another person.

The kicker is that the speaker may be right! But if the statement is made in a way that makes the other person feel like they are being bossed, or belittled or just flat...

how to know if it is time